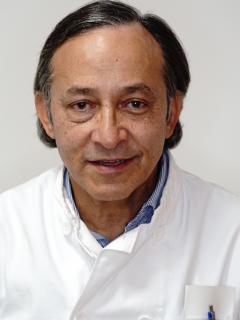 Andy da Costa was born on the sunny island Curaçao in 1951 and moved to The Hague in 1957 where he attended grammar school and high school ( gymnasium α ).

He graduated from Leiden University Medical School in 1979. After one year internal medicine in the Daniёl den Hoed Cancer Clinic in Rotterdam he started his training in surgery in Leiden University Hospital in 1980. In those days the training included all fields of surgery , thus delivering general surgeons.

After six  years of training in Leiden University Medical Centre, he decided to work as a surgeon on Curaçao . From 1986 until 1993  he worked on the island in the main Hospital ( St Elisabeth Hospital 900 beds at that time ), the Adventist Hospital ( 30 beds ) and in his own private practice building. In the same period he finished en defended his thesis at Leiden University (1989) .

For the further education of  his children and for his own development as a surgeon he returned  to Holland in 1993.

He worked since then in the Rijnland Hospital in Leiderdorp and Alphen aan den Rijn , where he held several positions in the organisation of  hospital and medical specialists ; from 2002 to 2012 he was head of the surgical training program.  From 2003 to 2007 he was member of the board of the Dutch Surgical Association.

As surgery these days requires specialisation within the field of surgery , he was specialised in gastro-intestinal, head-and neck and abdominal wall surgery, out-patient surgery and proctology had always his special attention.

Paying attention to complaints and needs of the patients and put the best quality in surgery under local anaesthesia in the IHCH whilst trying to avoid complications.